(Continuation of the post: Breaking the Cycle of Abuse)

My father also experienced abuse at school. All of the schools he attended as a child were Catholic parochial schools, right up until getting expelled from the last one in eighth grade. When I was little, there were two stories he told me about his elementary and middle school days in the 1950s. Stories I made him tell me over and over again because it always amazed me how, at such a young age, my father stood up for himself and others; even to authority figures. This included abusive priests and nuns; inflicting torment on children.

One incident occurred when he was younger, elementary school age. The story was about  the time a friend of his wore some pants that had a buckle on the back. They were a trend that came out in the mid 1950s and were called “Ivy League/buckle back” pants. Unfortunately, the buckles were known to scrape on the backs of the desk chairs and children were not supposed to wear them at this particular Catholic elementary school.

The story began, if my memory serves correctly, one day at school when a little boy in his class mentioned a concern of his; about how he was scared that he was going to get in trouble because of accidentally wearing the wrong pants. He was panicking about it to my dad, and didn’t know what to do. My father, at the age of about 10, decided, along with the boy they should rip the buckle off. The boy agreed, so my dad helped him do it. Someone eventually noticed the holes in the boy’s pants and they both got sent to the principal’s office for their punishments.

The principal was a nun of heavy stature, so much so, that she needed crutches to assist her with walking. She also had a well known proclivity; hitting children with them. I don’t know if the other boy got punished first, but I know how the confrontation ended. My father ducked when the nun swung at him, she spun right to the floor, and they both ran out very amused with his quick witted performance. He did not have a mark on him.

The other story, my favorite of the two, took place when my dad was in eighth grade. A friend of my father’s had a newspaper route which included, delivering a paper to the priest who was principal at their school. Every so often, the boy would ask my dad to fill in for him when he took vacation or needed a day off. One day my dad had a conversation with the priest because he was upset that the newspaper was not being put in the location he had firmly requisitioned. The priest explained to him how the paper had been ending-up in the bushes and this was not acceptable. He was pissed about it!

Even though my dad was not the one making the mistake; he did not tell the priest this. Eventually, the principal caught the regular paper boy doing it wrong and was now upset with both of them. 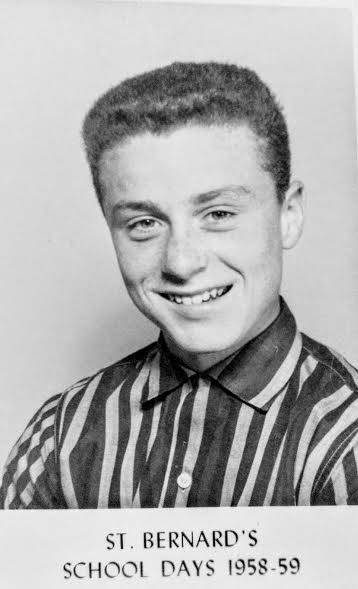 This resulted in the priest taking the other boy out of class one day and beating him up, excessively. When the boy came back to class and my dad saw how he looked, it set him off. At this point in my dad’s life he had endured a lot of physical abuse and had learned, out of survival, how to fight. After the priest sent his friend back into class, it was my father’s turn to go out into the hallway. A hallway that years later I can still remember walking down with my dad, when I was 10 or so, and him pointing at this very spot where it happened.The priest swung at my dad and he moved so that the priest ended up punching the locker. When he stood up again, my dad caught him off guard and punched him in the face. The priest fell to the floor and my dad proceeded to make him crawl all the way back to his office; threatening to hit him again if he didn’t. My father was expelled for this; oddly enough, in this instance, his father supported his actions, and he was not punished for his behavior. This was the last time he attended parochial school. He transferred to a public junior high school and stayed there until he graduated.

Abuse like this, during my dad’s childhood, was common and accepted. In our present day, I cannot imagine anyone being allowed to do this to my child; let alone condoning it. Times can change for the better if we are willing to learn from our mistakes. Luckily, my dad survived the abuse, and I believe came out stronger because of it. His anger, in physical form, was never directed at his family. He conveyed displeasure with a look and a deep, extremely assertive, tone of voice. Just the look made me burst into tears on several occasions. His eyes evoked a look of seriousness that I have a harder time imagining visually; than internally.

I learned to obey my father’s rules, as strict and rigid as they seemed at times, because he commanded it. As an adolescent I avoided tension and confrontation if possible. He made it apparent when the limits were pushed and I knew to recoil. Arguments were, and still are, very difficult for me to get through without crying. When engaging in a confrontational situation I have a tendency to cry when I am trying to defend myself, or choose flight mode, especially when I was younger. My father was always very sympathetic when I would start crying, but I tried to avoid pushing him to the limits. I don’t like to upset people, and I never wanted to make him angry, but we all learn from mistakes and without them; we would not transform. His stringent ways taught me to respect myself, those around me, and be aware that my decisions affect others too. His expectations gave me clear guidelines to follow, but still allowed for me to be an imaginative, happy, fun- loving child.

2 thoughts on “Abuse at School…”